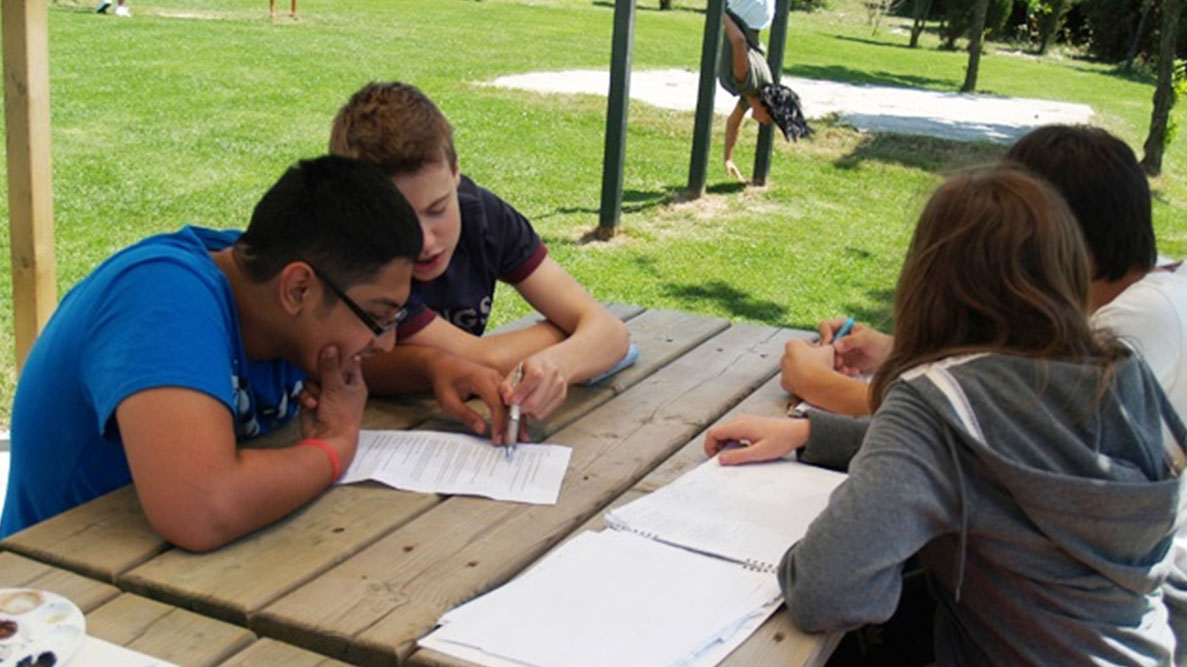 The Istanbul International Community School is an inclusive school with a very diverse learning community. Its IB DP (International Baccalaureate Diploma Programme) exam results are above world averages. In 2012 IICS introduce self-directed learning time to the schedules of DP students. The model provided DP students with individual schedules allowing for an average of 16 percent self-directed learning time. The bold move was championed by some teachers, supported by others, and strongly challenged by a few. One of the challenges came from the Head of Science, who was highly regarded by students and parents alike. As a chemistry teacher, his deep concern was covering the course's significant content. He knew reducing class time by this significant amount would compromise his students' chances for success on their final exam. During the self-directed learning time students were free to choose how they spent their time and on what courses. Students chose between working alone or collaboratively in one of two purposefully designed rooms. Alternatively, they could go to spaces like the library or art room. The school developed an online tracking system students used to report on what they were doing and where.

There were certainly challenges throughout the year as students and teachers learned how to best use SDL time. For example, students weren't always able to access their subject teachers because the fixed parts of their schedules were not always aligned.

Over the year students learned to use the time to their advantage. They independently developed their own learning groups. Students chose where to work, typically the independent study room or the collaboration room. They chose to focus on courses they believed needed additional attention. Students spoke highly of the study groups they formed, which became powerful opportunities for peer instruction. The Head of Math shared that even in her classroom during non-SDL time students began asking each other for help before asking her. Her role became facilitating student learning and helping when they struggled with complex concepts. (Read more about how the role of the teacher will change.)

Students' success on the IB DP exams became the measure against which SDL time was evaluated. In that very first year of SDL time students' DP exam averages exceeded the results of all previous years. Conversations about SDL time began to change. The Head of Science shared that he was so inspired by the success of the SDL time model that he began providing students more flexible, self-directed time during scheduled classes. Exam scores have continued to be positive indicators of the value of SDL time. The flexible time created by SDL has allowed for other improvements at IICS, including more time for students to work with college counsellors.

In interviews with students, one shared that SDL time helped prepare him for Maastricht University where students in his program were expected to self-direct; another said SDL provided invaluable time for her peers to do exam prep. A third talked about how the flexibility provided her with the time she needed to be a more successful learner. All of the randomly selected students advocated for SDL time.

IICS was recently praised by the New England Association of Schools and Colleges for the work it has been doing to make learning personal and relevant for every student. It's both exciting and affirming to know schools around the world are implementing similar initiatives to WAB's Future of Learning, or FLoW21.

Share to FacebookShare to TwitterShare to LinkedInShare to PinterestShare to EmailPrint this page
Chinese Culture, Colors, and Design in our New Learning Spaces
May 30 2019

Prominent and purposeful, Chinese elements were key in establishing the flow of energy and more throughout our spaces.

Read More about Chinese Culture, Colors, and Design in our New Learning Spaces
Self-directed Learning Opportunities in the Elementary School
May 28 2019

With teacher support,  even our youngest students have a range of opportunities to own their learning.

Read More about Self-directed Learning Opportunities in the Elementary School
How & Why: Learning in the New High School Space
May 24 2019

Specifically designed to support and enhance the innovative teaching and learning happening at WAB.

Read More about How & Why: Learning in the New High School Space
You Ask, We Answer: Are we Sacrificing Rote Learning & College Prep for New-age Skills?
May 23 2019

Rote learning still has an important place in building skills and knowledge, but we can't stop there.

Read More about You Ask, We Answer: Are we Sacrificing Rote Learning & College Prep for New-age Skills?
Design Signatures: 10 Differentiated Learning Spaces
May 15 2019

Each of our new spaces will incorporate ten signature areas designed for specific types of learning.

Read More about Design Signatures: 10 Differentiated Learning Spaces
Organizing Spaces with the Theory of Knowledge
May 10 2019

The spaces will be organized by the areas of knowledge an the ways of knowing. Here's how.

A focus on connecting students to nature and making learning relevant to life outside of school.

Read More about New "Little Village" playground to Connect Youngest Learners with Nature & Real World
You Ask, We Answer: How can I support my child in FLoW21?
Apr 10 2019

We know that a student’s learning experience improves when their parents take an active role in their education.

How do we know if FLoW21 is working to improve the way our children learn?

The evolution of learning at WAB has already begun school-wide - not only in specific school sections.

Read More about You Ask, We Answer: Will FLoW21 Implementation Begin in ES, MS, or HS?