A new series of Distinguished Speaker Series events is coming to WAB.

The DSS Alumni Series brings audiences inspiring stories from WAB's former students. In the first event of its kind, four alumni ranging from the Class of 2006 to 2019 will share stories of their journeys in pursuit of a music career.

The evening's distinguished speakers and our audiences will be tuning it from around the globe, as we will be hosting the first event of this series in a virtual format. 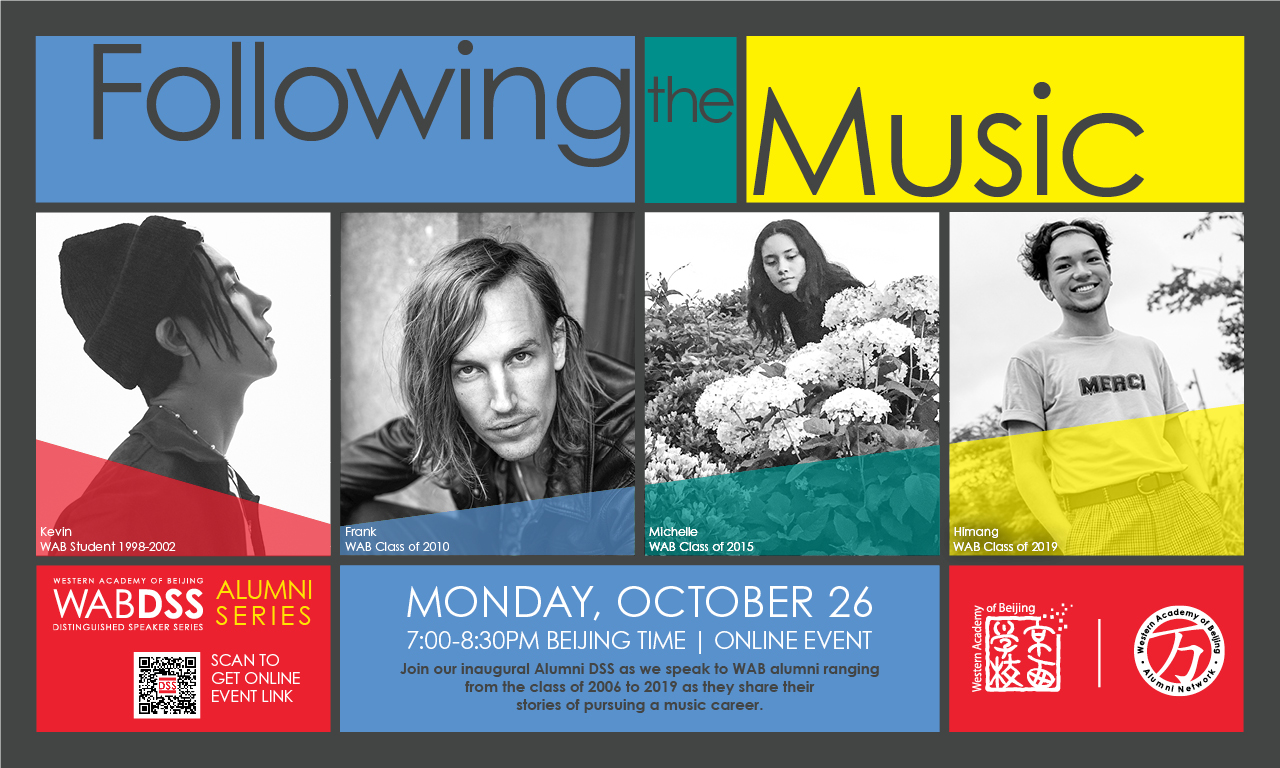 Himang is a Korean-Indian Pop/R&B singer-songwriter with intricate vocals, honest delivery, and a consistent rhythmic flow. Having started performing his original songs when he was just 13 years old, Himang draws inspiration from Tori Kelly, Jessie J, Jazmine Sullivan, and Ed Sheeran. His debut single 'Balls,' released in June 2017, showcased star potential as he composed, arranged, and produced the teenage love song fusing a range of styles including R&B, reggae, and trap. He is now attending Berklee College of Music, and has since released his first mixtape, "Foreshortening" (February 2020), in which he experiments with genres such as gospel and alternative rap.

Michelle started playing music at WAB in Grade 7 with her band, Room 6147. Since graduating, she has moved to Boston and continued to play guitar and sing both alone in her room and also with her band Mutual Friends. Michelle recently released her first single on streaming services under as a solo artist, Meiwei.

Frank began taking drum lessons when he was 12 years old. After finishing his music studies in London, Frank toured in China, Europe, and the United States as a drummer for several acts, including Desert Mountain Tribe, Cold in Berlin, and Alt Senior (Twinkle Star). Frank recently started a new musical journey as a self-producing artist, going under the name VAN ELST.

Kevin wanted to make his journey independently. He left a band, found his own place to stay, and began to write. Now, Kevin has produced three albums, the first of which, “Part One Seed of Truth”, earned him the Best New Artist Award from the Korean Music Awards. He subsequently started his own label, Free Culture (自由文化),  which has released two original singles in the United States:  "Hotel Tokyo" and "We Ride."